DETROIT, MI — The Detroit Sound Conservancy (DSC) is pleased to announce that it has been donated the artifacts of the former Graystone International Jazz Museum (GIJM) and will be accessing and activating the collection with an exhibit at the Detroit Public Library to coincide with the DSC’s Michigan Sound Conference to be held Friday, May 22. The Detroit Historical Society is helping the DSC house the collection while it plans a sustainable solution to the Graystone Legacy.

The Graystone International Jazz Museum (GIJM) was founded in 1974 but closed last decade as the original board members began to pass away and funds finally ran out. Some of the artifacts—photographs, posters, records, musical instruments, paperwork, historical research, and physical materials from the Graystone Ballroom itself which was torn down in 1980—were left in a local warehouse by the last board president. The rest of the artifacts were left in the Book Building, the last location of the museum, where they sit today. The DSC has worked for the last year and a half to secure ownership over all the Graystone materials from the final GIJM board members and, late last year, secured gift forms for the collection. Now, it is time to activate this rich legacy. 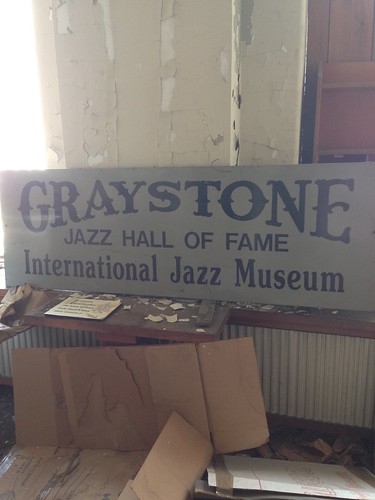 Photos taken before salvage at the Book Tower June 24, 2015.

With the help of the Detroit Historical Society the DSC will secure the collection, inventory its contents, raise awareness and donations, and plan for a sustainable solution to the Graystone Legacy. Over the next six months, the DSC plans to inventory and preserve those materials with acid free boxes and an online database, while creating a more complete plan for the collection that they hope will dovetail into a future DSC archive and museum.

The exhibit featuring a scrapbook and other images from the GIJM will be featured on the first floor of the Main Branch of Detroit Public Library near the Woodward Entrance. A part-time intern who is also a student in the Wayne State University School of Library and Information Science is helping the DSC execute the display. The Michigan Sound Conference is the DSC’s second annual academic conference dedicated to preserving the stories and sounds of Detroit music history. This year’s conference will feature fifteen different presentations as well as a panel discussion on the past, present, and future of preserving Detroit music historic districts.

The announcement of this exhibit and conference is just one of a number of events the DSC has planned this spring and summer including a music tour with Detroit Bus Company on June 7th and an upcoming event with Allied Media Projects for their Allied Media Conference June 20th. In addition, the DSC continues ongoing advisory work for United Sound Systems which was established as an historic district by Detroit City Council on May 12th, and engagement with the current owner of the Blue Bird Inn, a jazz landmark on Detroit’s West Side. The DSC was formed in 2012 to increase awareness of and support to Detroit’s imaginative musical heritage through advocacy and education in a spirit of vigilance and solidarity. For more information, please visit the DSC website (http://detroitsoundconservancy.org) or contact Executive Director, Dr. Gholz (c@detroitsoundconservancy.org or 313-757-5082).

The Detroit Historical Society is a private, nonprofit organization located in Midtown, the heart of Detroit’s cultural center. Founded in 1921, its mission is to educate and inspire our community and visitors by preserving and presenting our region’s shared history through dynamic exhibits and experiences. Today, the Society operates the Detroit Historical Museum and the Dossin Great Lakes Museum. In addition, the Society is responsible for the conservation and preservation of more than 250,000 artifacts that represent three centuries of our region’s rich history. Through its museum exhibits, school tour programs, community-based programs and history-themed outreach efforts, the Society serves more than 200,000 people annually. For more information on the Detroit Historical Society, visit detroithistorical.org.