Conferences are not just for talking heads and academic circles.

The conference can be a primary method of telling musical stories and documenting oral histories. The conference is also an effective tool for public exploration of themes and issues that affect cultural communities. In my years as a graduate student in ethnomusicology at Indiana University, I organized the “Roots of Techno” conference with goals of documenting oral histories and providing primary accounts of Detroit’s electronic music history from the musicians themselves.

Bringing the study of electronic music and dance music in the context of African American musical and cultural history into an academic context is an important enterprise for documenting techno and house. The conference was of primary importance in bridging the gap between the public and academic realms in DJ culture. Panels like “Roots of Techno: DJs Explore the History and Present State of Detroit Techno,” and “DJ Discussion & Demonstration: The Musical Characteristics of Detroit Techno and House,” featured Detroit DJ luminaries like Mike Clark, Cornelius Harris, Rick Wilhite, Terrence Parker, Marcellus Pittman, Theo Parrish, and Minx. 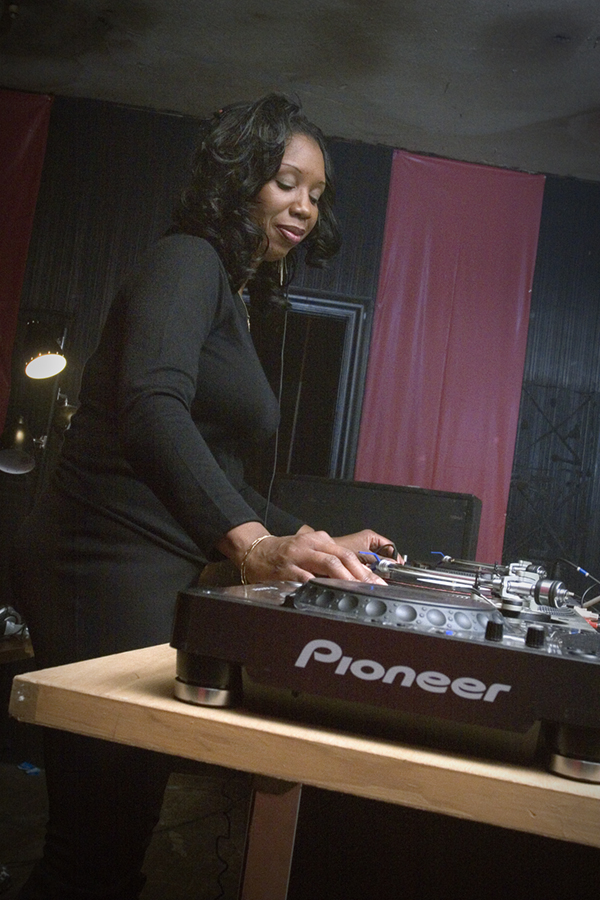 Minx DJing at the Roots of Techno afterparty. 2006. Photo by James M Rotz.

The discussions covered  a range of topics such as: (1) the evolutionary history of techno, spanning the decades from the late 1970s to the present; (2) techno pioneers, including DJs, radio deejays, and producers; (3) electronic equipment used in live and studio recordings; (4) audience response to this music; (5) issues of musical appropriation and changing identities; and, forming the general impetus for the entire conference; (6) issues of race and culture, relating techno to a broader continuum of African American cultural and musical expressions. [You can download the conference “Liner Notes” here.]

The Roots of Techno conference served as an impetus for my extensive research on Detroit music, both from Bloomington, and, in early 2008 to the present, in Detroit. The conference helped introduce me to key people in Detroit music. After I moved to the Detroit area, I wanted to know everything and everyone. I interviewed everyone I could who was willing to share their stories and Detroit histories, which turned out to be a lot of people. Each time I did an interview, I came home high on Detroit. I felt giddy and in love with this city, its people, its stories, and its legacies. This passion led me to write a forthcoming book about Detroit electronic music titled, Detroit Players: Wax, Tracks, and Soul in Electronic Music.

Giddy in love is how I feel each time I watch video footage of the Roots of Techno conference, and it is how I feel as I look forward to chairing the first annual Detroit Sound Conservancy conference. It is an honor to have the opportunity to contribute to a city and a community that has given me so much. I never wanted to simply take from it what I needed for  my own gain. Reciprocity guided me through all of my research and documentation. Before I began work on the Detroit Sound Conservancy in 2011, my best efforts at reciprocity included always paying entrance fees at events (even if I was on a list) and buying music by Detroit musicians. I continue to contribute financially to Detroit’s music commerce, and now I can contribute real efforts at preservation and education, representing Detroit’s diverse musical legacies to Detroiters and to people around the country and around the world.

I was asked to chair the Detroit Sound Conservancy’s upcoming “Conserving Sounds” conference on May 23rd because I have done this before. I am honored to have this opportunity to gather so many impressive journalists, scholars, sound activists, and thinkers together in Detroit to talk about Detroit’s vast musical cultures and communities, and to plan for the future. Detroit boasts a stunning cultural legacy, and the Detroit Sound Conservancy aims to document and preserve as much as we can in the interest of maintaining and nurturing this diverse, rich place. We hope it will be just the first in a series of events and programs that will fulfill our mission.

Denise Dalphond is one of the co-Vice Presidents of the Detroit Sound Conservancy. She speaks Friday, March 28th, 2014, at the Historical Society of Michigan Local History Conference, in Detroit. You can reach her directly at denisedalphond AT gmail.com