This is an update from our ongoing engagement with the Blue Bird Inn. You can read more about our efforts here. 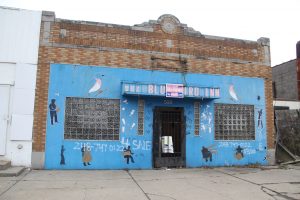 The Blue Bird Inn, located at 5021 Tireman on Detroit’s West Side was at one point the most prominent and important venue for modern jazz in the city. The club hosted numerous local and national acts from the 1940s through the 1970s, including such greats as Miles Davis, Charlie Parker, and John Coltrane. After jazz declined in popularity in the 1970s, the Blue Bird stopped hosting live music but remained open as a neighborhood bar until about ten to fifteen years ago when it it closed and fell into disrepair. This significant site was once a symbol of Detroit’s contribution to twentieth-century American music, and hopefully some day it can be returned to its former glory.

Earlier this year, archaeologists from Wayne State University’s Anthropology Department in conjunction with the Detroit Sound Conservancy conducted an archaeological survey of the vacant building, looking for remnants of the Blue Bird’s past. The team began by mapping the interior of the building, taking note of surviving elements of the old club. Though the interior of the building had been stripped since the bar’s closure over a decade ago, some reminders of the Blue Bird’s past remain intact. In particular, the stage and decorative backdrop, which were installed when the club was remodeled in 1957, remain in good condition. 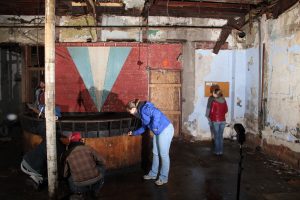 WSU archaeologists and the DSC investigating the stage. 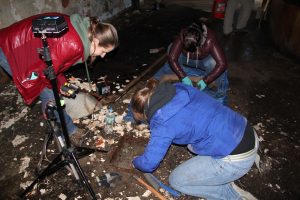 WSU archaeologists Athena Zissis, Samantha Ellens, and Sarah Beste recovering artifacts from a sink drain located where the bar once was.

In addition to mapping and surveying the interior of the building, a 1×1 meter test unit was dug behind the building, in the alley near the back door. Artifacts recovered from this excavation included refuse from the Blue Bird Inn, including beer and liquor bottles, animal bones and restaurant refuse, and architectural materials that possibly date from the 1950s when the club was remodeled. In addition, a broken vacuum tube from an old-style tube amplifier was also recovered, reflecting the buildings use as a musical venue. 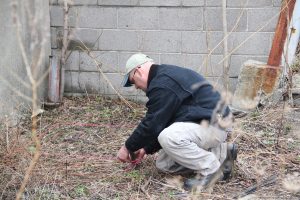 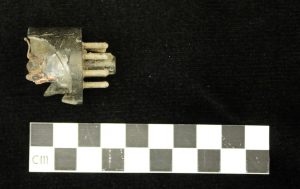 During the course of the survey inside the Blue Bird building, a cache of documents was discovered in the ceiling of the front entryway. These documents included a number of financial ledgers, check stubs, and receipts detailing the financial history of the Blue Bird from 1948 to 1949. This period was very important in the development of the Blue Bird as a prominent venue for bebop jazz, which was introduced in the fall of 1948 when the club’s owner hired the Phil Hill Quintet as the house band. This is evident from a payroll ledger from 1948 included with the documents that shows Philip Hill’s band receiving payment beginning the week of September 10th, while payments to the bar’s previous house band headed by Jimmie Caldwell disappeared. 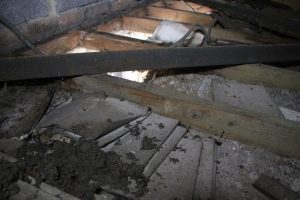 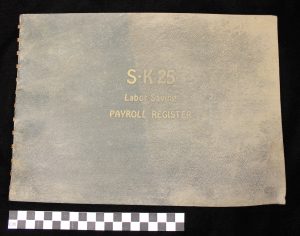 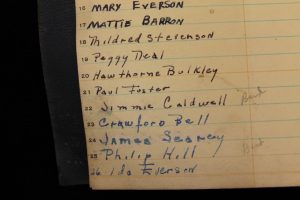 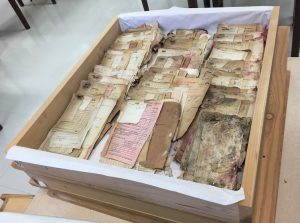 This transition, which shifted the style of jazz from swing to modern bebop, marked a turning point for the Blue Bird Inn, resulting in increased popularity for the club and changed it from a neighborhood bar to a destination for jazz enthusiasts across the city and nation-wide. The documents recovered at the bar offer a valuable glimpse at this important period for the Blue Bird when it transitioned into one of Detroit’s most iconic jazz clubs. Using this data, Wayne State archaeologists will be able to observe the evolution of the Blue Bird over this transitional period; learning valuable information by analyzing what products were popular, what distributors were used, and how the business was run. In addition to the recovered documents, archaeologists are researching archival sources from the Burton Historical Collection such as city directories and period newspapers, as well as books written about the history of Detroit Jazz such as Lars Bjorn’s Before Motown: A History of Jazz in Detroit, 1920-1960 (2001).

A detailed report and further research on this project will be released by Wayne State archaeologists in the near future, detailing the work done and information learned through this analysis. It is our hope that this information will renew interest in the importance of the Blue Bird Inn to the history and cultural heritage of Detroit and lead to the restoration and revitalization of this iconic venue. 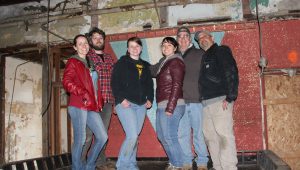 2 Responses to “Archaeology at the Blue Bird”