Destroy All Monsters: Performance and Interview

Destroy All Monsters, Detroit proto-punk rock band, performs and are interviewed on this cassette tape from journalist Walter Wasacz.

That recording was from the “infamous” Aug. 10, 1977 Kramer Theatre show that was sorta the catalyst for the best and worst of what was to come in the next few Detroit punk rock years. I was there trying to do an unannounced, gonzo-style interview with DAM for a fanzine Art Lyzak and I were looking to start up. I brought an inexpensive hand-held cassette recorder. We were calling it the “Detroit Bozo” but it never launched. White Noise beat us to it and began publishing a few months later. The lineup included DAM, Rob Tyner’s “new” MC5, the Sillies, and Bittersweet Alley. I had just come home from London, where I was taking a class in British film that summer and making the scene there as often as I could. I thought the Detroit stuff I saw and heard at the Kramer was dated in comparison, a hangover from the ’60s and early ’70s. The angry Brit and arty NYC scenes (which I dropped in on in ’75 and ’76) seemed so young and fresh. I was into the Stooges in ’69. Now I was more into Television and Throbbing Gristle. I didn’t know anybody in the Detroit scene outside of the Mutants and the Romantics and just busted backstage at the Kramer. I got the attention of DAM manager David Keeps (met him for the first time that night), who introduced me to the band. It was Ron, Mike, Rob and Niagara. The Miller brothers were out. Cary was out. It was essentially a heavy Detroit-Ann Arbor power trio fronted by Niagara. [Editor Note: Cary contends that the Miller Brothers indeed played on this gig.] Ron talked for a few minutes into the recorder then said they had to go on. I kept the tape rolling from the side of the stage and captured the performance. I wasn’t even sure I did that until Carleton [of the DSC] and I found that cassette in my attic last summer. I have another one I did in ’78 or ’79 with Ron at the Old Miami that I know is better. He told lurid tales of the Stooges spending months in London practicing and recording Raw Power, about him walking around stoned in Soho in Nazi gear, and the band fucking up its relationship with Main Man. The tape is somewhere in the house in a box, I’m sure.

The best part of the tape we had digitized comes near the end. Ron is trying to end the interview and asks me to come over to the house any time and gives me his phone number. Mike Davis leans into the mic and says “If you suck dick, you can come over any time.” I had some subsequent great, but unrecorded, interviews with Mike during the next few years.

I would make the case that the tape is an accidental artifact of an odd piece of Detroit music history. Ron and Mike were trying to pick up the pieces after a decade of mad success and failure. Niagara was working the intersection of art and rock beginning to find her identity. Musically, it doesn’t come close to the sonic art experimentation that Cary, Mike Kelley, Jim Shaw, Niagara nurtured a few years before this. Not to mention the Millers’ contributions. That came from some other more undefinable inner space, still a mystery of creation going on 40 years later. 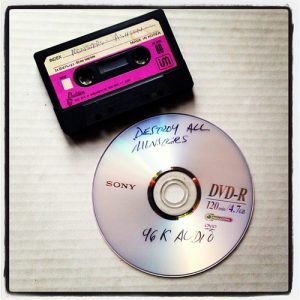 Format:Audio
Performer:Destroy All Monsters
Acquisition Source:Standard Cassette
Form/Genre:Rock
Run Time:00:58:31
Interviewee:Ron Asheton, Mike Davis
Interviewer:Walter Wasacz
Rights Advisory:Consistent with the Digital Millennium Copyright Act, if you believe that your copyrighted materials have been copied in a way that constitutes copyright infringement, please send an e-mail or written notice to our designated agent for notices of infringement and provide the following information: - An electronic or physical signature of the person authorized to act on behalf of the owner of the copyright interest. - A description of the copyrighted work that you claim has been infringed. - A description of where the material that you claim is infringing is located on our site. - Your address, telephone number, and email address. - A statement by you that you have a good faith belief that the disputed use is not authorized by the copyright owner, its agent, or the law. - A statement by you, made under penalty of perjury, that the above information in your notice is accurate and that you are the copyright owner or authorized to act on the copyright owner's behalf. - Our designated agent for notice for claims of copyright infringement is our Chief Executive Officer who can be reached as follows: By mail: Detroit Sound Conservancy, 6200 Second Avenue, Unit 201, Detroit, Michigan 48202 / By phone: (313) 444-8242 / By email: detroitsoundconservancyATgmail.com