A new ally, Alia Benabdellah, has written us a sonic reflection from France where she was raised and lives. She will be moving to Detroit this April for the summer to conduct research for her PhD. You can read her own related post, in French, via High Five Magazine.

The first contact I had with African American music was through my parents who loved Marvin Gaye, Otis Redding, and Nina Simone, among others. When I was around twelve, I remember being fascinated by “I Heard It Through the Grapevine” and “What’s Going On?”, two songs with such a strength and a very great sensibility at the same time. Then I discovered the history of this culture and how this community has always created amazing musical genres that also helped its long fight for freedom, which captivates me.

Since then I’ve always tried to learn more about African American culture and when I was nineteen I came to Detroit because I was a huge fan of Motown. I also wanted to see this city, which seems so unreal, especially from Paris, a tiny “museum” city as we called it, because everything here is majestic history. I discovered techno music just after that and was amazed to see that once again, Detroit was the starting point of a new genre. 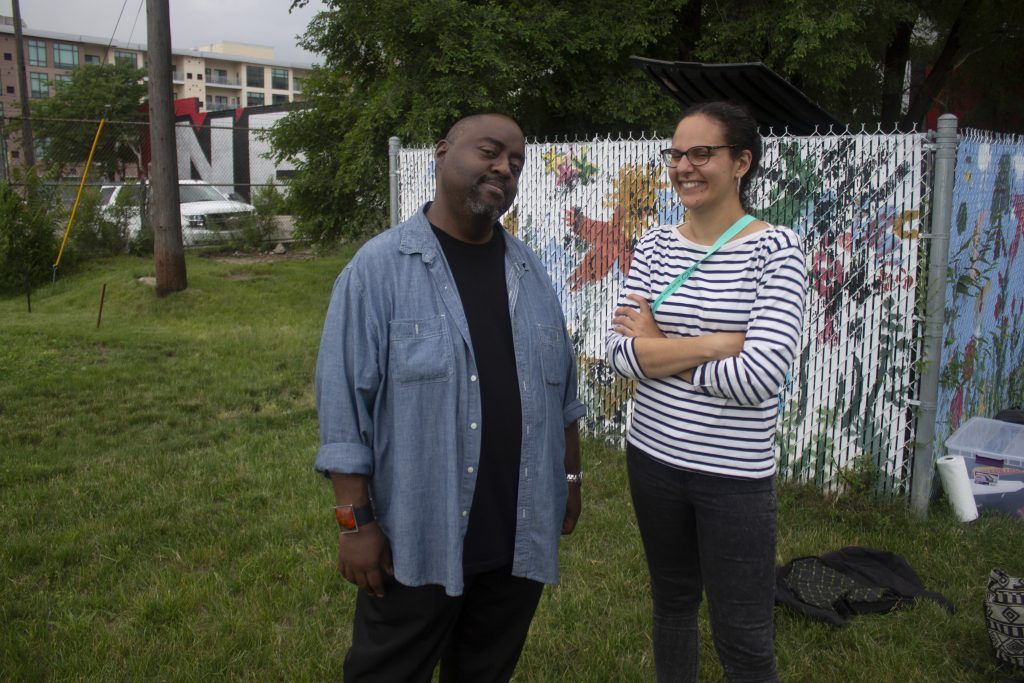 DSC Board President LaVell Williams with volunteer and music scholar Alia Benabdellah in 2015.

Starting university, I studied African American topics as much as I could — like an amazing exhibit about Miles Davis or by studying the body in early house music. When I was in the first year of my Master Degree, I decided to work on Underground Resistance for my memoir, and the following year, for my research memoir, I studied the aesthetic of Afrofuturism. I returned to Detroit in 2013, with some techno places to visit, including Submerge Records where I got the idea to continue my work with a PhD about Detroit and its militant techno scene.

I’m also working on these subjects in a militant way because I think that this culture — and all of the cultural productions of the African diaspora around the world — highlights abuses about the Western mentality regarding the ethnic minorities, its role in the submission of Africa and the difficulty of integration for these minorities — even today.

In my opinion, Detroit is a very attractive subject here in France. The situation of the city and the way that it has evolved, especially these last years, has been a subject of interest for many French newspapers like Le Monde. They mostly talk about the questions raised by a “shrinking city” or the bankruptcy, in short the most “sensational” aspects of Detroit. Libération, another French newspaper, wrote an article in 2014 which summed up well the French — probably European — perception of Detroit: “For a long time now the great city of Detroit, Michigan has embodied a form of urban apocalypse frightening America and the western world in general. The industrial ex-capital of cars made in USA is now the outline of a political and economic system which has failed.”

Photographers are also fascinated by the appearance of the city, for instance Yves Marchand and Romain Meffre, two young French photographers. They are passionate about contemporary ruins and they started their work on Detroit, work that you can observe in their book, The Ruins of Detroit.

But there are also other French people who are interested in different aspects of the city, particularly in the documentary field. Several directors made pieces about the city like Florent Tillon who directed Detroit, ville sauvage (Detroit, wild city) in 2010, a documentary about the urban resurrection of the city after the 20th century and how communities have started to use the DIY philosophy. The DIY in Detroit is a subject that particularly fascinates people, they’re curious to know how Detroit is renewing itself, with less means but with mutual help, community actions, etc.

It is also the main theme of the web documentary Detroit je t’aime (Detroit I love you) out in 2014. The two French girls who did the project, Hélène Bienvenu and Nora Mandray, wrote on their website: DIY Manifesto (formerly known as Detroit je t’aime) is a love letter to the Do-It-Yourself society. It is a social-issue interactive documentary where an LGBT bike shop, an urban farmer, and an activist strive to transform the economic crisis into an opportunity — to reimagining work, life, and ourselves. And where other change makers from other cities join forces to reach a new paradigm. Detroit is the starting point for thinking in a collaborative and sustainable way.” Another documentary came out last year, City Of Dreams. This fascinating Franco-American’s work is about the director, Steve Faigenbaum, who returns to Detroit after 25 years of absence. He shows, through his personal history, the decline of the city.

All these pieces prove that Detroit is a fascinating city for French who are fascinated by the decline of the city and in the meantime by how people build another way of life.

Regarding the music, every generation in France knows about Motown, Marvin Gaye, Stevie Wonder or Diana Ross but I don’t think that much people are conscious of the enormous contribution of Detroit in so many different music genres.

Regarding the electronic music scene, it’s a little more complex. On one hand the city has a special relation with Paris since Laurent Garnier, one of the first DJs in Europe to actually go to Detroit, play in the city and also bring Detroit DJs to Paris. Jeff Mills also contributed to make Detroit famous since he’s a “superstar DJ” in Paris, with every of his show booked months in advance. Jacqueline Caux, a French director and close friend of Jeff Mills, also did a famous documentary about techno in 2006, The Cycles of the Mental Machine, where Electrifying Mojo did the voice over.

On the other hand, and this is more of a European problem, people have the tendency to believe that techno was born in Germany. Once again it has a lot to say about the Western mentality but this is something that unfortunately stuck in the electronic community as it grew. And we can observe that most of the European scientific work that has been done has mostly dealt with the free parties, which are a pure European product where the black past of techno is rarely mentioned.

We can also add that Detroit becomes more and more of a “hype” place, which we can explain by the DIY philosophy that fits to the “hipsterisation” of our modern society and also paradoxically because of the growing influence of techno which made the city an Eldorado for the aficionados. The documentaries previously mentioned go in this sense, and there are also more and more people who choose to study the city in their scientific works but not specially by bringing to light the racial aspect of techno music.

– Example of an article in the newspaper Le Monde on November 2014 about the demolition of old buildings in Detroit — “Démolition de Détroit, on veut tout avoir nettoyé dans cinq ans” (“Demolition of Detroit, we want to have clean everything within five years”)

– Libération from the 8th of July 2014, “City of Dreams, tormented Detroit”