What ever happened to the Graystone Ballroom?

For those who remember, or were lucky enough to be around during the heyday of the vibrant, African American community known as Paradise Valley, they know how important the Graystone was to Detroit. It was one the area’s main attractions.

The Graystone Ballroom was a famous Detroit entertainment venue located on Woodward Avenue and was founded by jazz bandleader Jean Goldkette. In the 1920s, ’30s and ’40s prominent bands like the Duke Ellington and Jimmie Lunceford orchestras “battled” Detroit bands such as McKinney’s Cotton Pickers and Goldkette’s own group to the delight of dancers and listeners who packed the ballroom on a nightly basis.(1)

After the swing era diminished in the 1940s, the ballroom’s popularity dwindled and it went through a number of management changes before it permanently closed in 1972.

Despite the rallying, the building was demolished in 1980. (For more on the history and of the building and its demise, please read DSC ally Dan Austin’s piece on the Graystone here.) Jenkins managed to keep some of the archival materials from the landmark, which were part of the museum’s permanent collection. In 1991, the museum moved into a formal bridal shop at 1521 Broadway. He continued rallying for the resurgence of the ballroom until his death in 1994. Former Motown band leader and jazz musician Thomas “Beans” Bowles took executive directorship of the museum after Jenkins death and continued the work of keeping the museum around by seeking financial support through private donors, corporate support, and volunteers. Donna Gloff was the most recent executive director of the Graystone who took over after Bowles passed away in 2000.(4)

So, the question that still remains is what happened to the Graystone Museum? The museum is currently closed, but there is no record of when the museum closed and for what reasons.This museum was one of the first, if not the first institution in Detroit dedicated specifically to the preservation of jazz music. Jazz plays such an important role in Detroit and if the Graystone’s memory is restored, this institution would only add more substance to the genre’s position in the city. It would also add on to the already significant role that the Motown Museum plays in educating people about the history of Detroit music.

Unfortunately, not much has been discussed about the Graystone’s existence in current years.

As part of my mission to learn more about Detroit’s jazz history, I joined the Detroit Sound Conservancy and was tasked with the duty of finding more information about the Graystone International Jazz Museum.

I, like many others, was not even aware of the Graystone Museum until joining the DSC, so my inquisitiveness about the museum only increased after hearing about it.

My overall interest in Detroit jazz history began in 2011 when I interviewed music historians Jim Gallert and Lars Bjorn about the Detroit Jazz Festival for Model D. Gallert and Bjorn are the authors of “Before Motown: A History of Jazz in Detroit, 1920-60.” The book chronicles the unsung heroes of Detroit jazz and showcases the significant impact that Detroit had on the national jazz scene. As I stated in my article for Model D., Gallert and Bjorn are the gatekeepers of Detroit’s amazing jazz history, and they inspired me to want to dive deeper in the city’s musical past, thus recovering some of the treasures that many people, particularly Detroiters, don’t know about.

The Graystone Museum is a perfect example of Detroit’s vast musical past. There are still archival materials available that were part of the museum’s collection, including a number of interviews with Detroit jazz musicians who performed at the venue. The interviews were conducted in 1989 by journalist Larry Gabriel. I interviewed Gabriel to find out more information about the videos and to see what happened to them. 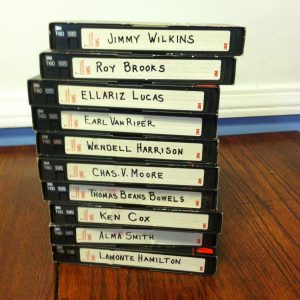 Gabriel owns the videos that were shot over 20 years ago, and he graciously allowed the DSC to preserve the videos so that they could be digitized and made available to the public via the DSC website.

The DSC is picking up the torch of the Graystone Museum and is continuing the work that Jenkins started over 30 years ago to preserve the history of the Graystone as well as America’s classical music.

The DSC is doing this to make sure talented Detroit musicians like Ellariz Thompson Lucas are given their due credit and are remembered for their impact on jazz. Lucas was a female saxophonist who played with the International Sweethearts of Rhythh, as well as band leaders like vibraphonist Lionel Hampton in the 1940s. Her cohort broke barriers as a female musician during a time when they were not respected or treated with the same level of respect as their male counterparts. Lucas was one of the 14 musicians interviewed by Gabriel for the Graystone collection and her interview is now featured on the DSC website.

[A transcript of this interview can be read via the Pop Up Archive.]

By documenting musicians like Lucas and others from Detroit, the DSC is continuing the work of historians like Bjorn, Gallert, and Jenkins who have fought to keep Detroit’s jazz history alive, as well as other institutional resources like the E.Azalia Hackley Collection located inside the Main Detroit Public Library.

In order to preserve our music history, we need to continue learning about the music that came before. That means visiting museums, asking questions, and supporting institutions that showcase the importance of Motor City music. Only by preserving our past can we learn more about our future.

Veronica Grandison is a freelance music writer from Detroit and graduate of the University of Michigan-Dearborn. She is a current contributor to Model D, Metro Times, and has written for Real Detroit Weekly and Detroit Grams. She runs a music blog called Roots, Rhythm and Rhyme.

1 Donna Gloff About the Graystone

6 Responses to “Preserving the Graystone Legacy”