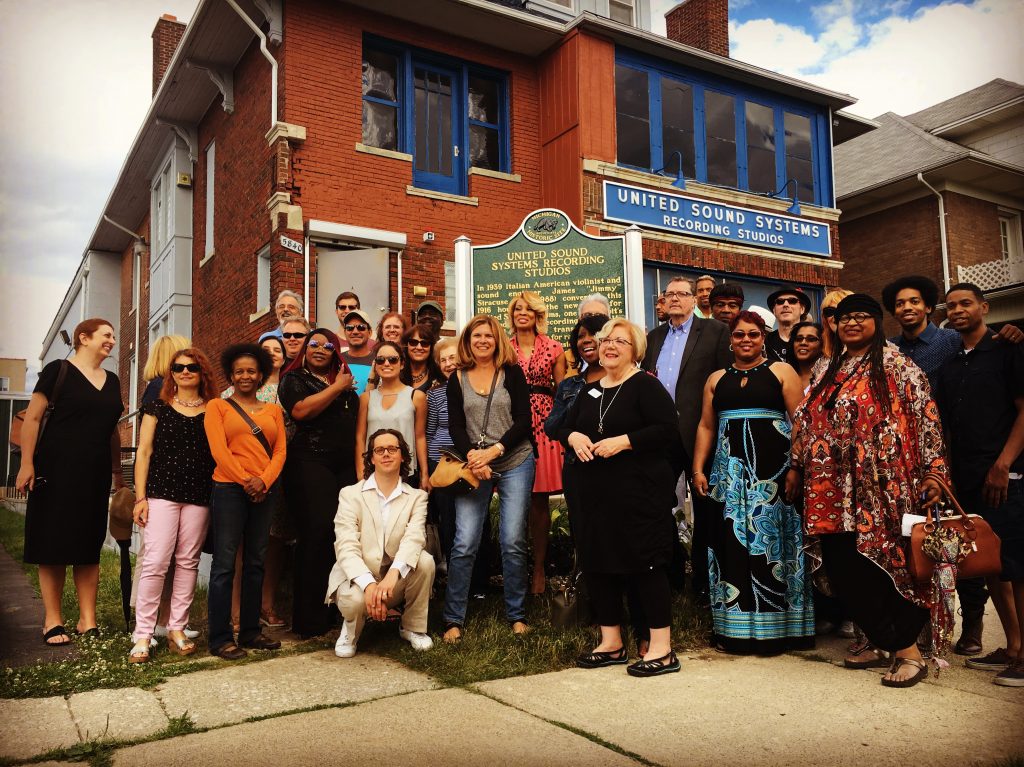 United Sound Systems Recording Studios (United Sound) was the site of numerous well-known recordings, including those by the most popular artists of many genres. Jazz greats like Charlie Parker and Miles Davis, blues legends like John Lee Hooker and Alberta Adams, soul singers such as Aretha Franklin and Isaac Hayes, funk groups like Parliament and Funkadelic, and rock bands like Death and the Red Hot Chili Peppers, not to mention various musicians from other genres, all recorded at United Sound. Marv Johnson‘s “Come To Me” was recorded there and released in 1959. It was the first single on the Tamla record label, the precursor of Berry Gordy‘s Motown.

Since 2012, we have been the leading advocate for United Sound’s historical legacy. We spearheaded the process to create a historic district for the site in 2015 and then helped raise the funds for a two-sided Michigan Historic Marker which was erected in 2017. Both of these efforts led the Michigan Department of Transportation to change its mind about having to demolition the property for the expansion of I-94.

Today the struggle to protect and defend United Sound Systems continues! If you have any questions please contact us via email at info@detroitsound.org or call direct at 313-757-5082

On Friday, January 11, 2019, Michigan Department of Transportation announced the purchase of United Sound Systems and their intention to move, preserve, and eventually resell the building. Via Michigan Radio: “This is the first day that we know of when the Michigan Department of Transportation said out loud that it’s a bad idea to demo the building, and that they will preserve the building. And so we’re going to take that as a win,” (Executive Director of DSC) Carleton Gholz said. Gholz said he hopes there is a historic covenant or “some sort of understanding” with any future owner about preservation and operating the space as a public good, “and we are hoping to impact that process in any way that we can.” “This is not just a building. It’s not just a business. It really is the center of Detroit’s musical 20th century,” said Gholz. Read more here: http://www.michiganradio.org/post/detroits-historic-united-sound-systems-studio-spared-demolition

In June 2018, United Sound Systems was put up for sale. You can read more here.

On Sunday, June 25th, an event was held at United Sound Systems from 4 – 6 pm to celebrate the installation of the Michigan Historical Marker. 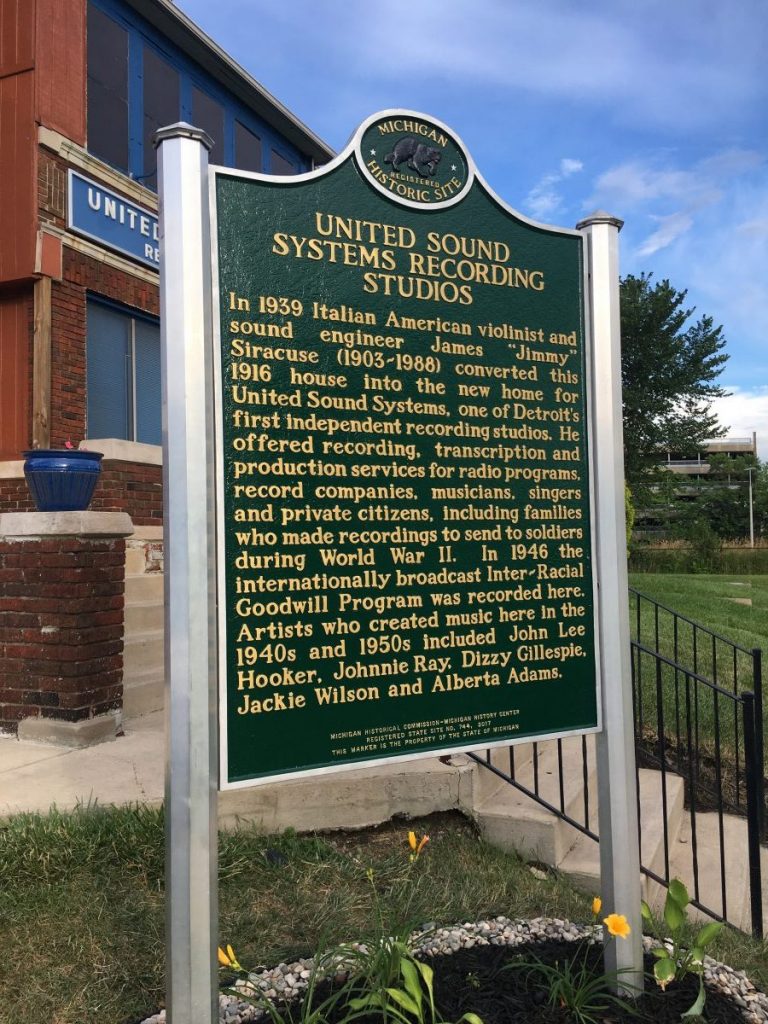 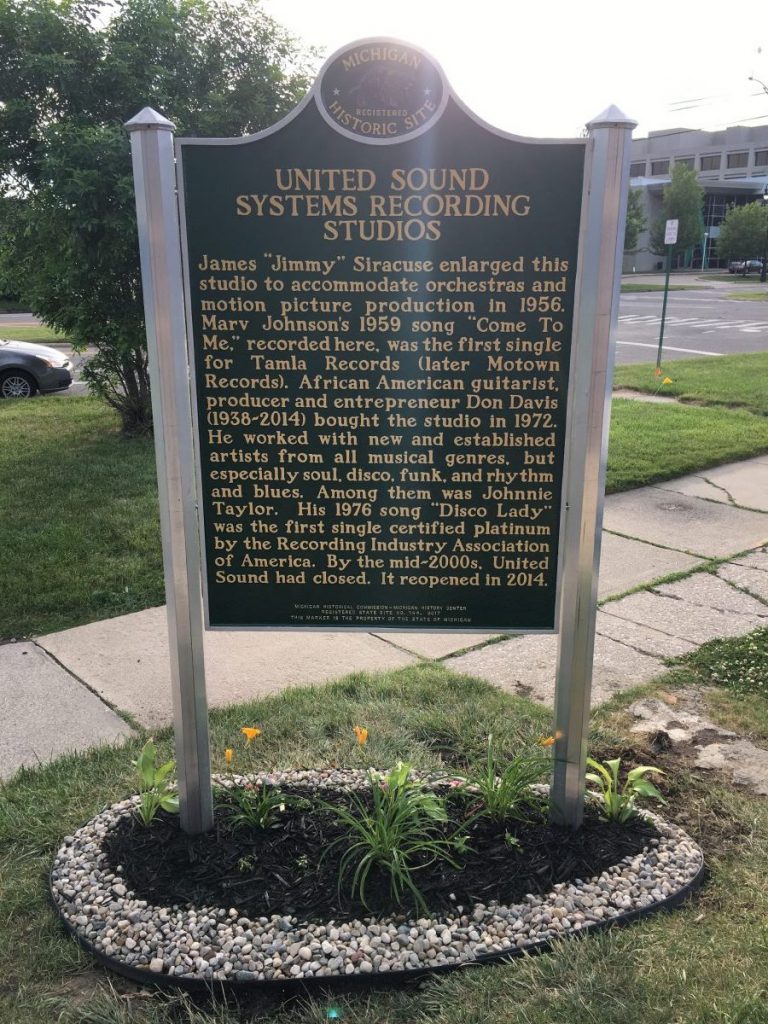 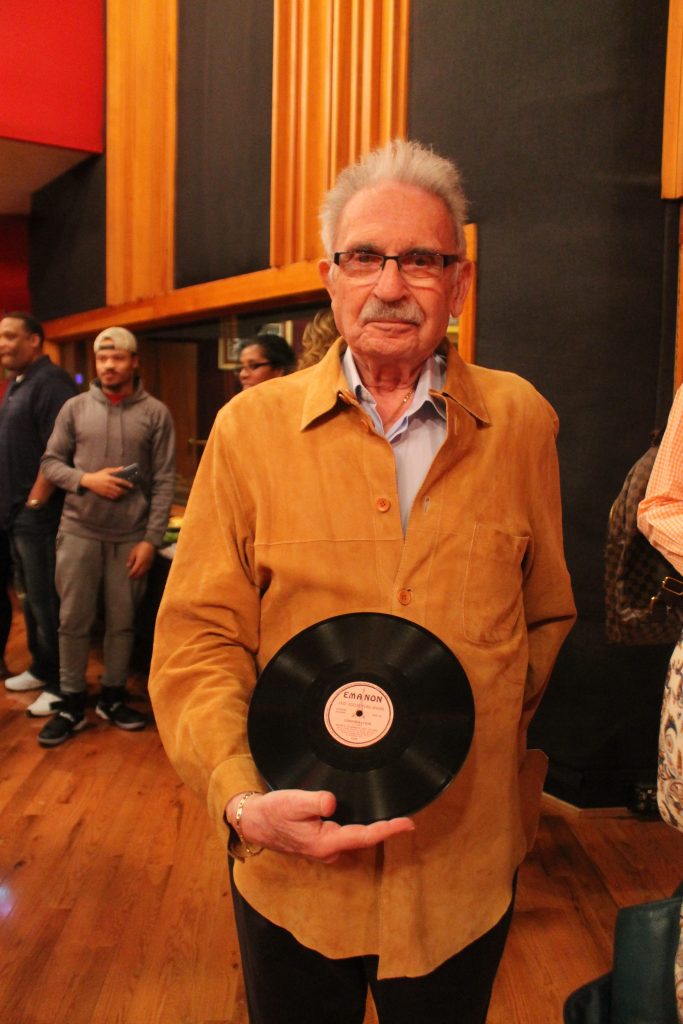 Photo of Dave Usher who produced artists like Dizzy Gillespie and Jackie Wilson at United Sound Systems. He joined us at the unveiling of the marker. 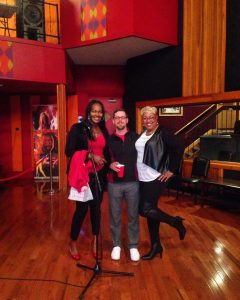 In August 2015, Detroit Sound Conservancy announced that they would help United begin the process of getting a Michigan Historical Marker for the studio.

A successful fundraiser was held on October 23rd which brought in over $3000 towards the Michigan Historical Marker.

From November 2015 to May 2015, DSC rented spaces for its first office, vault, and exhibit area in the lower level at United Sound.

Detroit Sound Conservancy was asked in January 2014 by the owners of United Sound for help in efforts to preserve the historic United Sound Systems in Detroit.

In this effort, DSC asked historical preservationist Rebecca Binno Savage to begin the process to achieve historic designation in Detroit. DSC believed that the Detroit City Council should designate the United Sound Systems building as an historic district in Detroit.

The United Sound building meets the criteria for designation for the following reasons:

It has been determined eligible for the National Register of Historic Places by the Michigan State Historic Preservation Office.

Housed in a converted residential structure, it has been leasing recording studios at this site since approximately 1940.

It deserves to be protected under the City of Detroit’s Ordinance in Chapter 25, Article 2 for Historic Districts.

In May of 2014, Rebecca Binno-Savage gave an update on the historic designation process at our first Detroit music conference.

In fall 2014, the Historic Designation Advisory Board (HDAB) staff began writing up its final draft report for the approval of the HDAB.

On February 12, 2015, the HDAB voted unanimously to approve the final draft report and ordinance for making United Sound an historic district.

After a sixty day waiting period, the proposal and ordinance lead to the City Council for a vote.

The vote was delayed multiple times. One vote was scheduled for April 9th, another for April 23rd.

On May 7th a public hearing by the “Planning and Economic Development Standing Committee” of Detroit’ City Council was held on the proposed ordinance. Council Member Gabe Leland chaired the hearing. Council Member Mary Sheffield, a member of the committee, was in attendance. A presentation was made by Janese Chapman from HDAB (which included a short video). Afterwords a short presentation was made by owner Danielle Scott and manager Chynita Richards. They both took questions from the Committee. Our Executive Director Carleton Gholz spoke for the ordinance during the public comment period.

A vote by the City Council was scheduled for May 12th. Gholz spoke in favor of the ordinance.

The vote was unanimous with all nine City Council members voting for the ordinance.

On June 11, 2015, USS received a letter from HDAB saying that the ordinance had been passed on May 20th (effective April 20th).

United Sound owner Danielle Scott said, “I’m excited to finally see things moving forward. This historic designation is confirmation that the hard work and dedication that everyone has provided these past years did not go unnoticed. I just wanna thank everyone that contributed to bringing this dream to fruition, especially the Detroit Sound Conservancy.”

In June of 2012, Detroit Sound Adviser Isaac Moore began using LocalWiki to document the contemporary history of United. United is currently threatened from a planned I-94 highway expansion that would, according to the Final Environmental Impact Statement, 2004, tear down the studio. In 2012, the DSC Landmarks Committee, including Moore, has been working to bring this alarming situation to the attention of Detroit music lovers throughout the world.

There have been reports in the local press that MDOT would be willing to move United Sound. It should be noted though that the only guaranteed way to preserve USS is to either 1) Revise the E.I.S. to avoid the proposed USS historic district completely and / or 2) legally stop the I-94 expansion.